Scientists use satellite images to monitor the conditions of forests, crops and the environment, but their research relies on those images accurately measuring the light being reflected from Earth.

Imaging engineers at South Dakota State University are identifying more sites worldwide with which to determine the accuracy of those images through a partnership with Google Earth Engine. More calibration sites will increase precision by allowing scientists to select sites that are ideally suited to specific spectral bands of reflected light.

SDSU scientists use the satellite data, for instance, to predict the risk of West Nile virus in South Dakota during the summer. Others track how drought affects deforestation in Brazil and whether forest fire management techniques in the western United States are impacting the size and frequency of the fires.

Specifically, imaging engineer Larry Leigh identified pseudo-invariant calibration sites, known as PICS. These sites are located in remote places, such as deserts and dry lake beds, where the surface properties and therefore the reflectance, do not change over time.

As a result, a ground crew only needs to visit the site once to take measurements, rather than being deployed each time that the satellite passes over the location. That significantly decrease the cost of satellite sensor calibration.

Through the $46,000 Google Earth Engine research award, Leigh and three graduate students have direct access to the Google archives that include U.S. Geological Survey Center for Earth Resources Observation and Science images and the computing power to compile the images via Google Earth Engine and its cloud computing capabilities. 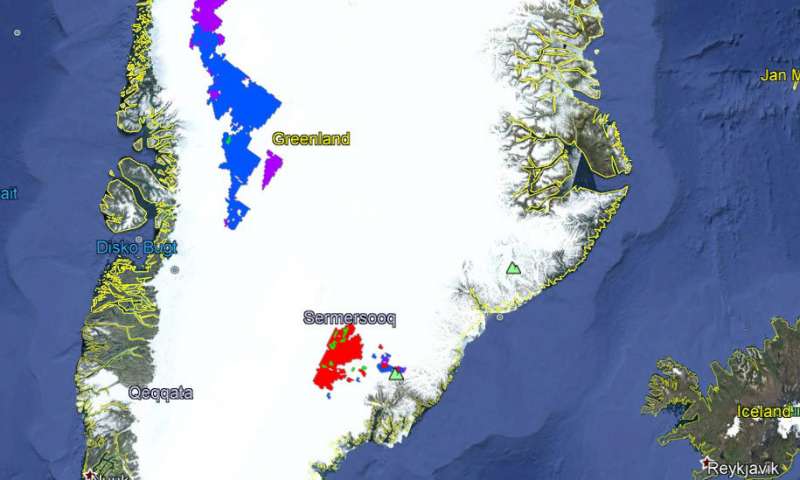 Previously, one site was used for all spectral bands. However, Tabassum, said, “The new approach evaluates each location, identifying the best ones for each spectral band.” That will help ensure that the data the satellite sensors record accurately measure the light energy reflected from Earth.

Furthermore, Leigh explained, the discovery of new PICS has also allowed the imaging engineers to increase the overall reliability of satellite sensors, both now and in reference to historical images.

Over the last 40 years, the sensors aboard satellites have become more reliable. The initial specification for Landsat 1 calibration was a 15 percent error, but for Landsat 8, the error, known as the uncertainty threshold, has been reduced to 3 percent. Having more PICS allows the imaging engineers to push that uncertainty threshold to below 1 percent, according to Leigh.

In addition, doctoral student Mahesh Shrestha has begun to take advantage of these new sites that will lead to recalibrating images from past instruments, such as Landsat 1, using the long-term datasets from these new PICS. This will ensure that an image taken at a particular site 40 years ago is as reliable as one taken two days ago.

“This is a numbers game,” said Leigh. “We need as much data as possible to be able to perform statistical validation on the results via improving the frequency of image acquisitions, accuracy of measurements and speed of analysis to detect sensor drift.”

With the number of satellites increasing every year, calibrating onboard sensors is vital to producing accurate readings. “The use of new PICS is increasing our ability to perform these calibrations accurately and efficiently,” Leigh added.