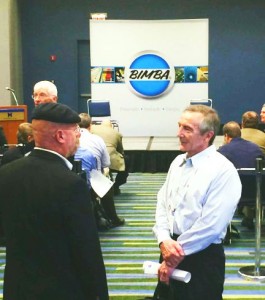 Hyneman, cohost of the popular MythBusters program on the Discovery Channel, will officially serve as Bimba’s Director of Strategic Development, a role, he says, that will involve interacting with Bimba’s engineers and R&D team. Hyneman says he has worked with Bimba pneumatic actuators for years and has a “rack full of them” in his shop. Hyneman’s company, MS Industries, not only makes props and  effects for entertainment venues, but also works with industrial companies on a variety of special projects. Among the more recent ones was the construction of dummies with extensive realistic wounds for training U.S. Army medics.

Hyneman says Bimba actuators have played a role in a number of Mythbuster episodes. One of the more notable appearances involved determining whether cell phones can cause explosions when used near a gas pump. (The MythBusters decided they can’t.) In the course of testing various scenarios involving static electricity, the crew used a Bimba actuator to drag fabric back and forth across a surface in a container filled with gas fumes. The result was a fairly impressive explosion.