NASA’s Terra satellite saw a stream of smoke that extended over 500 miles from various fires raging in northern California out over the Eastern Pacific Ocean.

The Moderate Resolution Imaging Spectroradiometer or MODIS instrument aboard Terra passed over California on Oct. 12 and captured a visible light image of the smoke plume. The MODIS image showed the stream of smoke extending from Santa Rosa, California, located north of San Francisco, out into the Eastern Pacific, parallel to San Diego. A stream that stretched over 550 miles.

The CAL Fire website noted in the California Statewide Fire Summary of Friday, Oct. 13, 2017, “Overnight firefighters continued their battle against 17 wildfires that have burned 221,754 acres. Several of the wildfires merged with other fires, while full containment was made on three other.”

A Red Flag warning remains over the entire Sonoma Valley/Napa Valley area for Oct. 13. CAL Fire noted on Oct. 13 that the death toll had risen to 31 across four fires as estimates remain that 3,500 homes and other structures have been destroyed. 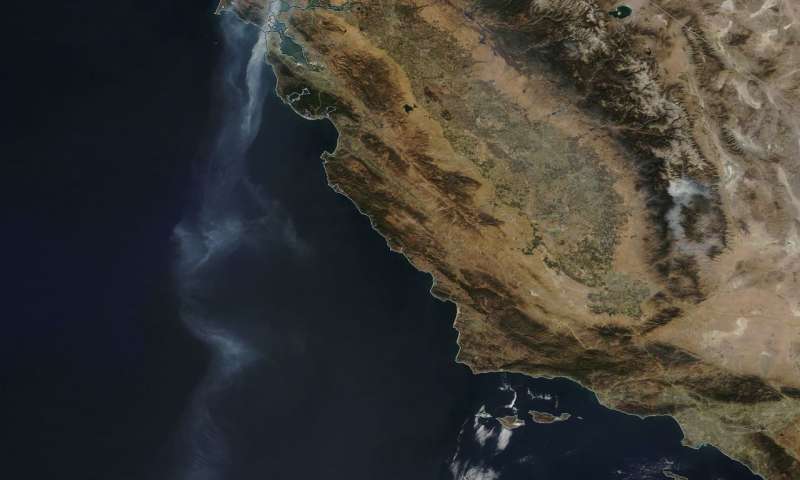 NASA’s Terra satellite saw a stream of smoke that extended over 500 miles from various fires raging in northern California out over the Eastern Pacific Ocean. (Image Credit: NASA)