NASA’s Global Precipitation Measurement mission or GPM core observatory satellite flew above Tropical Storm Fabio in the eastern Pacific Ocean as the storm was quickly strengthening into a hurricane. GPM provided a look at the heights of thunderstorms within, and estimated rainfall.

Fabio formed as a depression on Saturday, June 30 around 5 p.m. EDT. It was the seventh tropical depression of the Eastern Pacific Ocean hurricane season. By 5 a.m. EDT on July 1, the depression strengthened into a tropical storm and was named Fabio.

Since Fabio is about 700 miles (1,125 km) south of the southern tip of Baja California, Mexico and far from land, there are no coastal watches or warnings in effect.

Rainfall measurements by GPM’s Microwave Imager (GMI) and Dual-Frequency Precipitation Radar (DPR) instruments showed that Fabio contained intense convective storms. DPR measured precipitation that was dropping at a rate of over 175 mm (6.9 inches) per hour in the heaviest concentration of rainfall that was located just west of the tropical storm’s center of circulation.

The GPM satellite’s radar (DPR Ku Band) scanned strong convective storms that were producing heavy precipitation close to the southwestern side of Fabio’s center of circulation. This simulated 3-D view from the south used GPM’s radar data (DPR Ku Band). It shows that a few storm tops near the center of the tropical storm were reaching heights of almost 16 km (9.9 miles). Cloud top heights over a larger area are shown here by adjusting cloud top heights estimates from the GOES-West satellite’s infrared temperatures to match storm top heights measured by the GPM satellite’s radar (DPR Ku band). Tall convective storms near the center produce energy (latent heat of condensation) that can aid in the intensification of a tropical cyclone.

GPM is a joint mission between NASA and the Japan Aerospace Exploration Agency, JAXA.

At 11 a.m. EDT (1500 UTC) on July 2, the center of Hurricane Fabio was located near latitude 12.8 degrees north and longitude 110.9 degrees west. The National Hurricane Center noted that Fabio was moving toward the west-northwest near 9 mph (15 kph). A slightly faster west-northwestward motion is expected over the next few days.

Strengthening is expected during the next day or two, and Fabio is forecast to become a major hurricane on Tuesday, July 3. 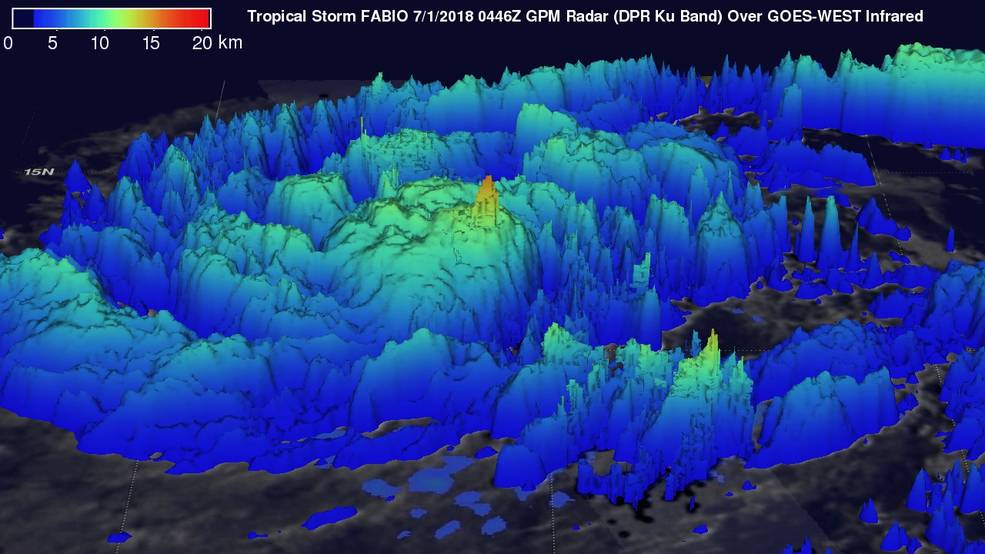 Fabio was located south of Mexico on July 1, 2018 at 12:46 a.m. EDT (0446 UTC) when GPM passed over the storm. GPM measured precipitation at a rate of over 175 mm (6.9 inches) per hour just west of the tropical storm’s center. GPM found a few storm tops near the center of the tropical storm were reaching heights of almost 16 km (9.9 miles). (Image Credit: NASA/JAXA, Hal Pierce)