Dealing with trash is a challenge wherever people work and live, and space is no exception. Astronauts produce a couple of pounds of trash per crew member per day. To better manage this, NASA is developing a new trash processing system to demonstrate on the International Space Station. This work is critical for potential future missions traveling farther from Earth, to the Moon and Mars, and for longer periods of time. Current modes of trash disposal and waste management will not be available at the extreme durations and distances these missions will require – while the space station is only 250 miles above us in low-Earth orbit, the Moon is about 240,000 miles away, and Mars is on average about 140,000,000 miles away! In addition, the new system will give astronauts the ability to recover valuable resources from their trash, an important thing when you have to take everything with you.

The current approach to space trash management involves astronauts manually compacting their trash as much as possible and storing it in stowage bags. The most common way of “taking out the trash” is then to fill a spacecraft, such as a Northrop Grumman Cygnus or a Russian Progress, that delivered research experiments and supplies to the station and let it burn up during reentry into the Earth’s atmosphere. This is feasible for the space station, since it’s relatively close to our planet, orbiting only a couple of hundred miles above us.

However, for longer-distance space missions without the frequent resupply missions that also provide crew members with trash receptacles, dealing with garbage will be more challenging. With lengthier periods of trash accumulation, storing garbage inside the spacecraft would create health risks for the humans on board. And astronauts won’t just be able to dispose of garbage “overboard”, because that would pose planetary protection risks – that is, the risk of contaminating another world’s environment.

Another factor driving the development of a new trash processing system is that garbage actually contains valuable resources. As we travel deeper into space, it’s imperative to reuse and recycle as much as possible, since it’s costly to launch all the supplies and materials needed for a mission to the Moon or Mars. NASA’s new trash processing system in development, the Heat Melt Compactor, will provide not only a way to safely manage garbage within a spacecraft but also a way to recover water and other resources from trash that will then be available for reuse.

The current, prototype Heat Melt Compactor system is designed to compact everyday astronaut trash into nine-inch square “tiles” that take up less than one-eighth of the original trash volume. The compacted trash is then heated to 150 degrees Celsius (more than 300 degrees Fahrenheit) to sterilize the material, boil off water and vent off noxious gases. The gases could be released to the vacuum of space or can be processed into safe gases that can be released into the spacecraft’s air revitalization system. The water that boils off can be recovered for onboard needs, and the tiles – free of bacterial growth and undesirable smells – can be used for radiation shielding. Imagine using dry trash tiles to line the interior of a radiation storm shelter for increased safety! 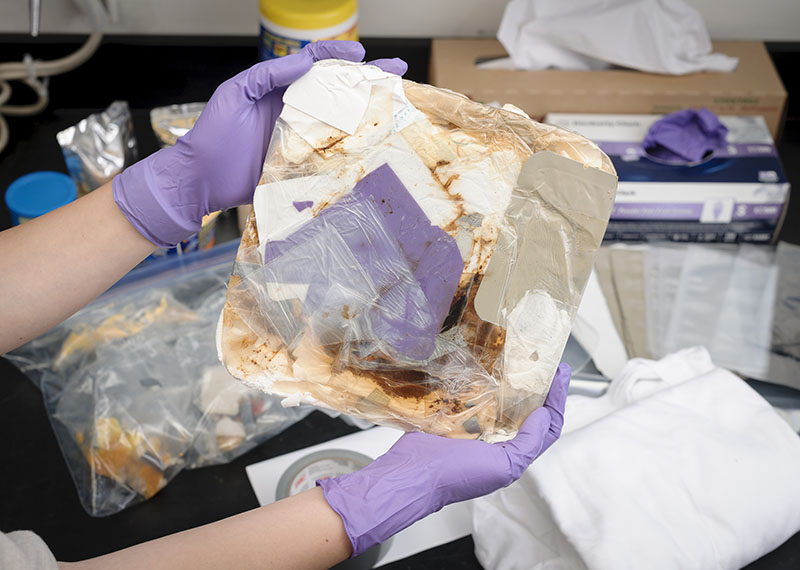 By helping to generate practical solutions from the problem of trash and waste, the Heat Melt Compactor could play a key role in the development of sustainable space exploration programs.

The current Heat Melt Compactor has been tested extensively on Earth. The next steps will be to select a group to build an updated version of this technology and then to test it in space, aboard the International Space Station, in preparation for use on future missions to the Moon and Mars.