Opto 22 has announced the Network LED Dimmer, a compact, solid-state, and networkable LED dimmer that uses pulse width modulation (PWM) to control LED brightness (0-100%) for 9-30 VDC constant voltage LED lighting assemblies such as lamps, bulbs, strips, ropes, and bars. Used alone or teamed with other Dimmers, the Network LED Dimmer is suitable for any application that requires variable light from LEDs. Lighting designers, facility engineers, and architects can use the Dimmer in applications such as stage or accent lighting, LED color mixing, path marking, backlighting, and facade or wall lighting. When connected to an RS-485 serial network, multiple Network LED Dimmers can be integrated into a lighting, automation, or building control system that supports DMX512-A, Modbus/ASCII, or Optomux network protocols.

The compact and lightweight Network LED Dimmer is also suited for vehicle and vessel applications, where the energy efficiency and long life of low-voltage LED lighting is critical. Similarly, the Dimmer’s small size benefits machine builders who need to implement LED lighting as part of their product.

The Dimmer includes a built-in test pushbutton for ramping LED intensity up and down, connectors for wiring a pushbutton for manual operation, and indicator lights to show serial communication and ramping operation. 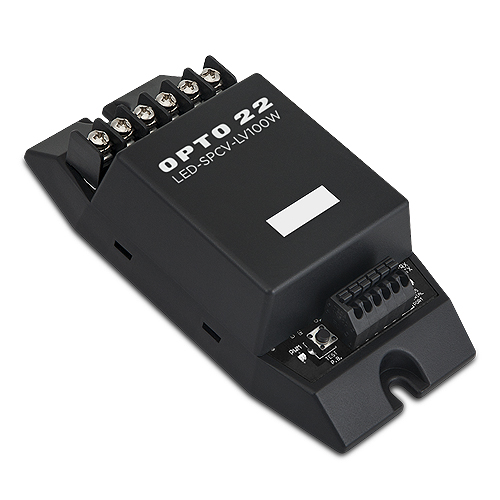 As with other Opto 22 products, the Network LED Dimmer has a QR code imprinted on the inside cover that makes current documentation and configuration information available immediately. Scanning the QR code with a smartphone or other Internet-connected mobile device brings up product instructions, specifications, wiring, and an interactive utility for configuring internal DIP switches; see an example here: http://op22.co/LED-SPCV-LV100W (Note this page is styled for use with mobile devices.)