The Global Precipitation Measurement mission or GPM core satellite analyzed Hurricane Jose and found some very tall, powerful thunderstorms within, despite still being battered by wind shear as it moves between Bermuda and the Bahamas.

On Wednesday, Sept. 13 at 10:35 a.m. AST/EDT (1435 UTC) the GPM core observatory satellite traveled above persistent hurricane Jose as it was meandering in the Atlantic Ocean. GPM found that even though Jose was affected by strong northwesterly shear, it contained very powerful convective storms. GPM’s Dual-Frequency Precipitation Radar (DPR) found extremely intense downpours within these storms where rain was measured by DPR falling at a rate of over 8.9 inches (227 mm) per hour.

At NASA’s Goddard Space Flight Center in Greenbelt, Maryland, GPM’s radar (DPR Ku Band) was used to create a 3-D cross-section of the precipitation within hurricane Jose. This 3-D examination by DPR showed that some of the powerful convective storms within Jose had tops that were reaching altitudes greater than 10.85 miles (175 km). GPM is a joint mission of NASA and the Japan Aerospace Exploration Agency, JAXA.

On Sept. 13 at 1:50 p.m. EDT (17:50 UTC) the Moderate Resolution Imaging Spectroradiometer aboard NASA’s Aqua satellite captured a visible image of Hurricane Jose that continued to show the storm was being affected by vertical wind shear as the storm appeared somewhat elongated from northwest to southeast.

At 5 a.m. AST/EDT (0900 UTC) on Thursday, September 14, 2017, the National Hurricane Center said the center of Hurricane Jose was located near 25.1 degrees north latitude and 66.5 degrees west longitude. That’s about 445 miles (715 km) east-northeast of the southeastern Bahamas and 510 miles (815 km) south-southwest of Bermuda. The estimated minimum central pressure is 986 millibars.

Jose was moving toward the west near 3 mph (6 kph). The National Hurricane Center said a turn toward the northwest with an increase in forward speed is expected later today, Sept. 14. Maximum sustained winds were near 75 mph (120 kph) with higher gusts. Little change in strength is forecast during the several days, but Jose could weaken to a Tropical Storm by Friday.

The National Hurricane Center (NHC) cautioned that “swells generated by Jose are affecting Bermuda, the Bahamas, the northern coasts of Hispaniola and Puerto Rico, and the Southeast coast of the United States, and will spread northward along the Mid-Atlantic coast of the U.S. during the next few days. These swells are likely to cause life-threatening surf and rip current conditions.”

The NHC predicts that Jose will remain far from land over the open waters of the Atlantic Ocean. Track models show a looping motion during the next couple day and that is followed by a turn toward the North Atlantic. 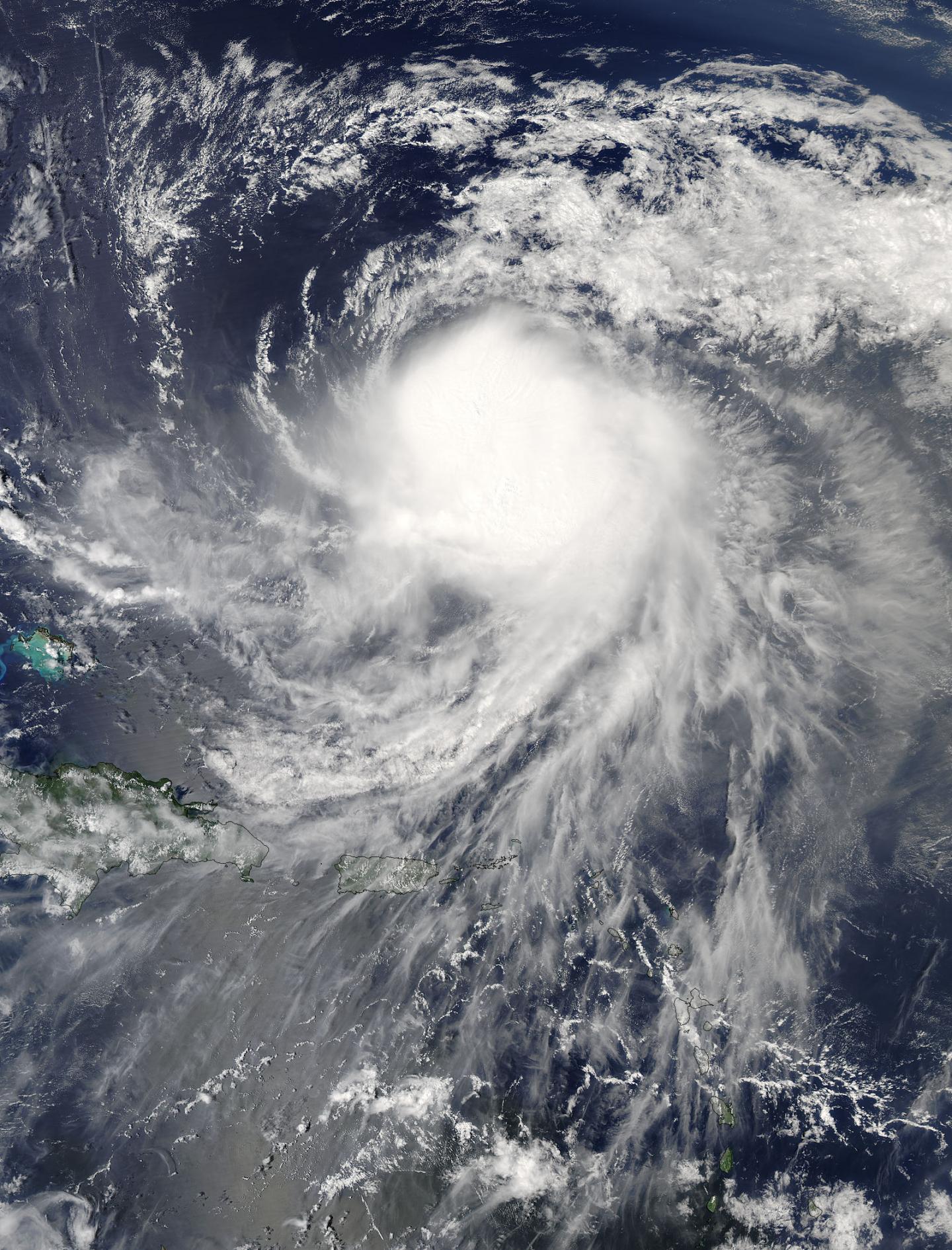 On Sept. 13 at 1:50 p.m. EDT (17:50 UTC) NASA’s Aqua satellite captured this image of Hurricane Jose that continued to show the storm was being affected by vertical wind shear. (Image Credit: NASA)