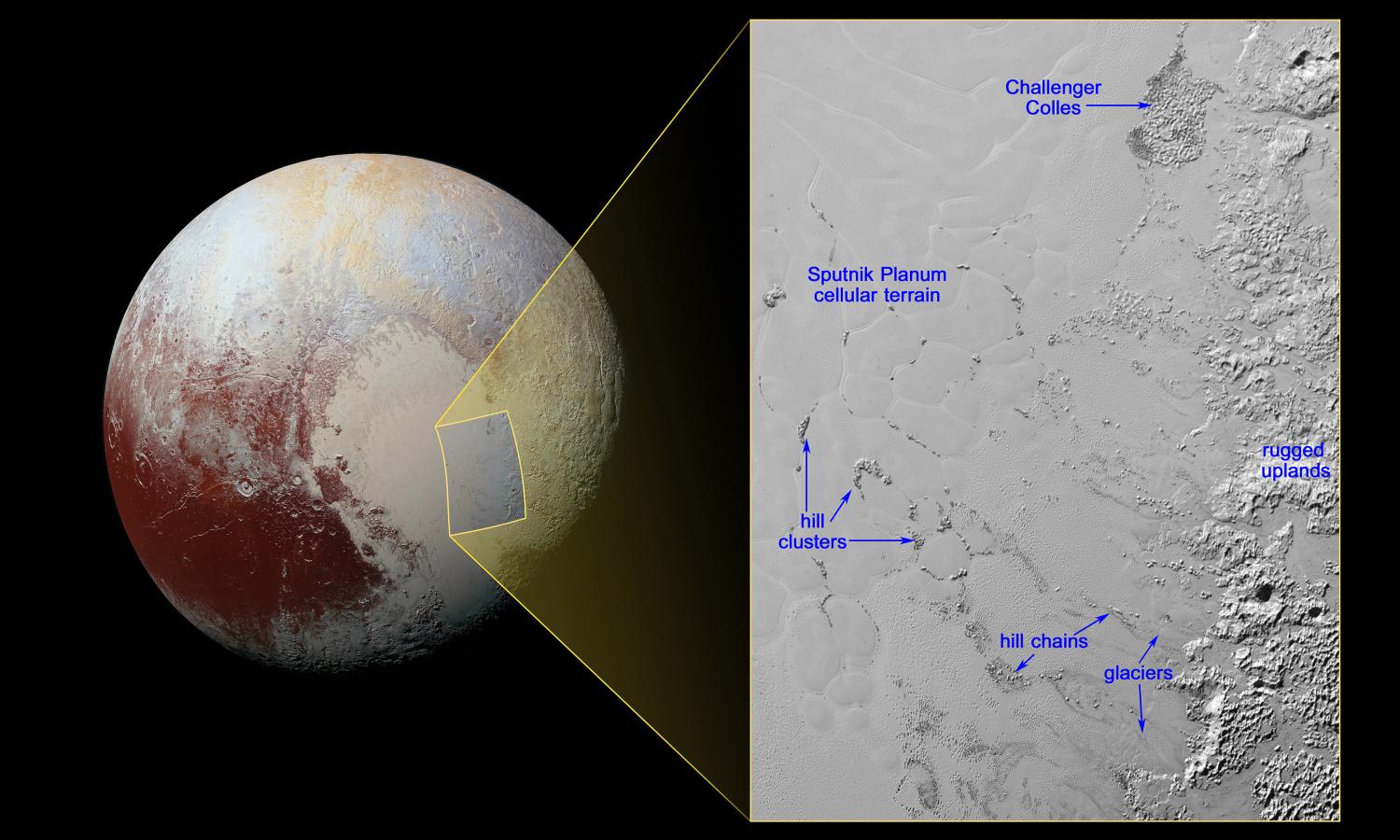 Hills of water ice on Pluto ‘float’ in a sea of frozen nitrogen and move over time like icebergs in Earth’s Arctic Ocean—another example of Pluto’s fascinating geological activity. (Credit: NASA/JHUAPL/SwRl)

The nitrogen ice glaciers on Pluto appear to carry an intriguing cargo: numerous, isolated hills that may be fragments of water ice from Pluto’s surrounding uplands. These hills individually measure one to several miles or kilometers across, according to images and data from NASA’s New Horizons mission.

The hills, which are in the vast ice plain informally named Sputnik Planum within Pluto’s ‘heart,’ are likely miniature versions of the larger, jumbled mountains on Sputnik Planum’s western border. They are yet another example of Pluto’s fascinating and abundant geological activity.

Because water ice is less dense than nitrogen-dominated ice, scientists believe these water ice hills are floating in a sea of frozen nitrogen and move over time like icebergs in Earth’s Arctic Ocean. The hills are likely fragments of the rugged uplands that have broken away and are being carried by the nitrogen glaciers into Sputnik Planum. ‘Chains’ of the drifting hills are formed along the flow paths of the glaciers. When the hills enter the cellular terrain of central Sputnik Planum, they become subject to the convective motions of the nitrogen ice, and are pushed to the edges of the cells, where the hills cluster in groups reaching up to 12 miles (20 kilometers) across.

At the northern end of the image, the feature informally named Challenger Colles – honoring the crew of the lost space shuttle Challenger – appears to be an especially large accumulation of these hills, measuring 37 by 22 miles (60 by 35 kilometers). This feature is located near the boundary with the uplands, away from the cellular terrain, and may represent a location where hills have been ‘beached’ due to the nitrogen ice being especially shallow.

The image above shows the inset in context next to a larger view that covers most of Pluto’s encounter hemisphere. The inset was obtained by New Horizons’ Multispectral Visible Imaging Camera (MVIC) instrument. North is up; illumination is from the top-left of the image. The image resolution is about 1050 feet (320 meters) per pixel. The image measures a little over 300 miles (almost 500 kilometers) long and about 210 miles (340 kilometers) wide. It was obtained at a range of approximately 9,950 miles (16,000 kilometers) from Pluto, about 12 minutes before New Horizons’ closest approach to Pluto on July 14, 2015.