From its humble beginnings as a two-man sales and service operation designing and installing control systems for industrial equipment, Pyromation, Inc. has grown to one of the most respected names in the temperature sensor business. Over the last 50 years, the Company – headquartered in Fort Wayne, Indiana – has become one of the largest temperature sensor manufacturers in North America, and boasts sales to over 45 countries.

Dick Wilson and Bill Lewis founded Pyromation in 1962 and worked in the region, selling and servicing controls for industrial ovens and other equipment. By 1968, the business had evolved to the manufacture of thermocouples for industrial processes, and moved to its current location on Industrial Road. 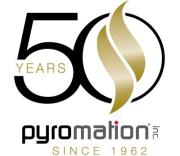 Over the next two decades, Pyromation continued to diversify its product lines through the production of Resistance Temperature Detectors (RTDs), temperature transmitters, connection heads and the addition of an NVLAP-accredited metrology lab. The company also focused on significantly expanding its rep. and distributor network.

Pete Wilson, son of Dick Wilson, transitioned to President/Owner of the company in 1992, and led Pyromation’s growth in both domestic and international sales. Pyromation earned ISO 9000 certification in 2000 and committed to Lean Manufacturing starting in 2003. The company continued its product line and market diversification, initiating thermowell production in 2006. In 2011, Pyromation had grown to 175 team members.

Pyromation is launching into its second half-century with a bang, kicking off the anniversary year with celebratory events, including a January ribbon-cutting ceremony for the recently completed 15,000 square foot facility expansion. “Through good fortune, great sales channel partners and hard work by everyone here at Pyromation, we’ve realized great success through our first 50 years,” said President Pete Wilson. “And we’re well-positioned to continue building on that success over the next half century as a Fort Wayne-based leader in the design, production and sales of industrial temperature sensors, assemblies and components.”