Solar Impulse 2 was on Monday approaching the end of its epic bid to become the first sun-powered airplane to circle the globe without a drop of fuel to promote renewable energy.

When the experimental aircraft touches down in Abu Dhabi in the early hours of Tuesday it will cap a remarkable 42,000-kilometre (26,097 mile) journey across four continents, two oceans and three seas.

With Swiss explorer and project director Bertrand Piccard in the cockpit, the plane is due to land at Al-Bateen Executive Airport in the UAE capital where it launched its tour on March 9, 2015.

On Monday Solar Impulse 2 was flying over the Saudi desert north of Riyadh, heading towards the Gulf.

“After a turbulent night from extreme high temperatures, the sun rose above a desert of sand dunes above #SaudiArabia,” Piccard said on Twitter.

Dubbed the “paper plane”, Solar Impulse 2 is circumnavigating the globe in stages, with 58-year-old Piccard and his compatriot Andre Borschberg taking turns at the controls of the single-seat aircraft.

It took off from Cairo on its final leg early on Sunday, having previously crossed Asia, North America, Europe, and North Africa.

Borschberg, 63, smashed the record for the longest uninterrupted journey in aviation history with the 8,924-kilometre (5,500-mile) flight between Nagoya, Japan and Hawaii that lasted 118 hours. 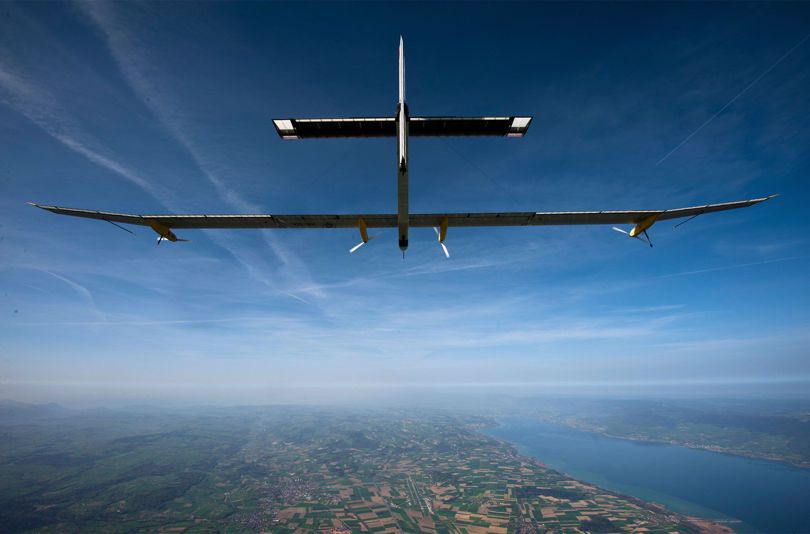 The solar-powered Solar Impulse 2 takes off from Cairo International Airport in the Egyptian capital on July 24, 2016 as it heads to Abu Dhabi on the final leg of its world tour.

No heavier than a car but with the wingspan of a Boeing 747, the four-engine battery-powered aircraft relies on around 17,000 solar cells embedded in its wings.

Its broad wings and light weight make it particularly sensitive to turbulence.

The plane has clocked an average speed of 80 kilometres (50 miles) an hour.

The pilots use oxygen tanks to breathe while at high altitude and wear suits specially designed to cope with the extreme conditions.

They must withstand temperatures inside the tiny cockpit ranging from minus 20 degrees C (minus 4 degrees F) to plus 35 degrees C (plus 95 degrees F).

The plane, equipped with a parachute and life raft in case of an accident, flew at an altitude exceeding 30,000 feet (9,144 metres) over Saudi Arabia on Sunday.

Piccard has said he launched the project in 2003 to show that renewable energy “can achieve the impossible”.

The bid was initially expected to last five months, including 25 days of actual flying.

But the aircraft was grounded in July last year when its solar-powered batteries suffered problems halfway through the trip.

The project has also been beset by bad weather conditions and illness which forced Piccard to delay the final leg.

While in the air, the pilot is constantly in contact with the mission control centre in Monaco, where a team of weathermen, mathematicians and engineers monitor the route and prepare flight strategies.

“It’s a project for energy, for a better world,” were Piccard’s last words to journalists in Cairo before taking off.

A psychiatrist who made the first non-stop balloon flight around the world in 1999, Piccard had warned that the last leg of the Solar Impulse 2 tour would be difficult due to the high temperatures.

“It’s been two hours now I’m flying into high up and down drafts. And I can’t even drink. It’s really exhausting…,” he tweeted on Sunday.

Speaking to the BBC from the cockpit, Piccard described the final stage as a “fantastic moment” and likened the plane to a “flying laboratory”.

“We are testing all these new, clean and modern technologies in order to fly with an endless endurance,” he said.

While the pilots do not expect commercial solar-powered planes any time soon, they hope the project will help spur wider progress in clean energy.

“We have new insulation material, new LED lamps, we have new extremely light carbon fiber structures… All this can be used now on the ground,” dividing “by two the energy consumption and therefore the CO2 emissions of the world,” Piccard said.

“It’s a complete revolution in the protection of the environment.”