Saving energy that would otherwise have been wasted, and storing it for use when needed later, is the function of the Dynamic Energy Storage device (DES) from Michael Koch GmbH, a manufacturer of braking resistors. The storage choke installed in the DES ensures that the device will be efficient with minimal power loss. 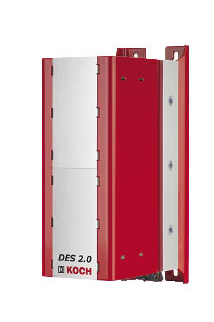 The DES increases the energy efficiency of an electric drive system. It provides storage capacity of about 2 kilojoules. As a temporary storage device it collects the kinetic energy from one or more drive units that has been converted into electrical energy and releases this back into the system as needed.

As a peripheral device for frequency inverters or servo controllers, the DES is a network independent device for tasks previously performed by network-sensitive recovery units or ballast resistors that dissipated energy. With short repeat times, the DES renders configuration and commissioning unnecessary. For example, if its full capacity is used every 5 seconds, the energy savings in a three-shift operation over the course of a year is equal to about 3500 kilowatt hours. 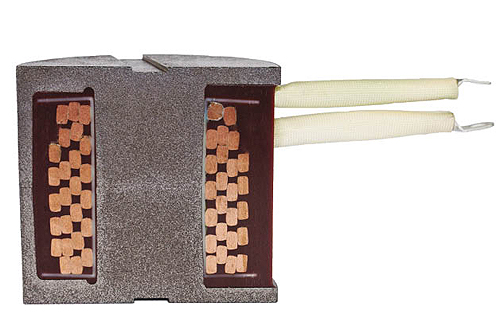 Cross-section through an SMP storage choke wrapped in a high-frequency wire strand.

The engineers used a storage choke specially designed by SMP for temporary storage of the electrical energy in the device. The deciding factor was its relatively low power loss. The storage choke is used in a standard buck-boost inverter. An electrolytic capacitor is charged from a high to a lower voltage through the buck converter function. The boost converter function supports the dc intermediate circuit with the energy from the electrolytic capacitor. In both cases, the electrical energy is “buffered” in the storage choke.

SMP Sintermetalle Prometheus GmbH & Co KG (SMP) provides inductive components for frequency inverters in a range of industrial applications. These are generally low-loss, have good EMC behavior and are compact. When integrated in the input area of the frequency inverter they are responsible for energy recovery. In the output area of the inverter they serve as filter chokes. Because of their compact design and low noise output the chokes are also used as stand-alone, and in a common mode configuration in the intermediate circuits of the frequency inverters.

The core material of the chokes consists of low magnetorestriction powder composites developed individually for each application. These materials have low eddy current and hysteresis losses, so the inverters are efficient.

The choke’s closed construction also ensures a low-intensity stray field. Accordingly, this makes it possible for other components to be positioned around the chokes without exposing them to magnetic influences from the choke. The space-saving configuration allows the volume of the assembly to be reduced by about 25%. In addition, these chokes run quietly, so the inverters can also be installed in residential areas.

SMP chokes are designed for frequencies up to 200 kHz and currents as high as 1000 A. They are available with diameters ranging from 36 to 300 mm with weights of 50 grams to 130 kilograms. Protection types from IP00 to IP66 are available. The chokes can be used in temperatures up to 180° C. All components are compliant with RoHS and REACH restrictions, the materials used are UL listed. The inductive components are suitable for use in inverters for wind turbines, solar inverters, railway technology, medical engineering as well as drive technology and power electronics.