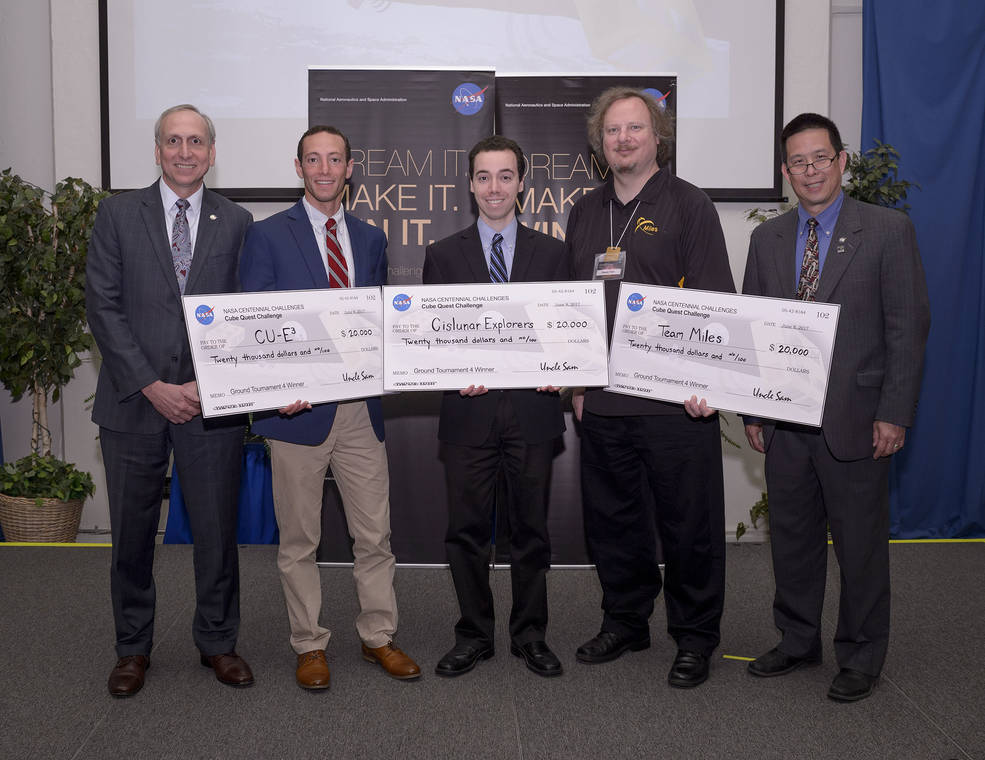 NASA’s Space Technology Mission Directorate (STMD) has awarded rides for three small spacecraft on the agency’s newest rocket, and $20,000 each in prize money, to the winning teams of citizen solvers competing in the semi-final round of the agency’s Cube Quest Challenge.

The three winning teams secured space to launch their CubeSats on Exploration Mission-1, the first integrated flight of NASA’s Space Launch System (SLS) and Orion spacecraft. Once deployed, the CubeSats will vie for a share of a $5 million prize in the first-ever competition in deep space. The three teams are:

“We are delighted in the profound achievements of these teams,” said Steve Jurczyk, STMD associate administrator. “Each team has pushed the boundaries of technology and innovation. Now, it’s time to take this competition into space – and may the best CubeSat win.”

Tucked into the Orion stage adapter – the ring that connects Orion to the SLS rocket – the CubeSats will deploy after the Orion spacecraft separates from SLS and starts on its journey into deep space.

These small satellites are each about the size of a large shoebox and designed to be efficient and versatile. As some of the first CubeSats to operate in deep space, they will drive advances in small spacecraft propulsion and communication technology.

“Opening our first SLS test flight beyond the moon to citizen inventors and the scientific community creates a rare opportunity for these small spacecraft to reach deep space,” said Bill Gerstenmaier, associate administrator of NASA’s Human Exploration and Operations Mission Directorate. “These CubeSat-class payloads are expanding our ability to explore by demonstrating affordable and innovative capabilities relevant to future deep space missions.”

The final phase of the Cube Quest Challenge comprises two segments: the Deep Space Derby and the Lunar Derby. In the Deep Space Derby, teams must demonstrate communications capabilities from a range of at least four million kilometers from Earth – more than 10 times the distance to the moon – while the Lunar Derby requires teams to achieve a lunar orbit where they will compete for near-Earth communications and longevity achievements. Prizes will be awarded for orbiting the moon, communicating the fastest and farthest, and surviving the longest.

The Cube Quest Challenge offers a total of $5 million, NASA’s largest-ever competition prize purse, to teams that meet the challenge objectives of designing, building and delivering flight-qualified, small satellites capable of advanced operations near and beyond the moon.