Know that sickening feeling when you exit the grocery store and find your car has been banged up by a runaway shopping cart? It may one day be just a bad memory if auto body manufacturers make use of a new suite of tests developed by the National Institute of Standards and Technology (NIST) and three industry partners. Data from these tests could eventually help your vehicle’s exterior better defend itself against dings, dents, scratches and things that go bump on the highway.

In a new paper in the journal Progress in Organic Coatings, researchers at four organizations–NIST and industry partners Eastman Chemical Co., the Hyundai America Technical Center and Anton Paar USA–describe three versions of a fast, reliable laboratory method for simulating scratching processes on automobile clearcoats (the uppermost, or surface, layer of an exterior polymer composite coating). The tests are designed to give manufacturers a better understanding of the mechanisms behind those processes so that future coating materials can be made more scratch resistant and resilient.

Stronger, more robust coatings are important to meet both consumer and industrial demands. For example, statistics show that: people are keeping their cars longer and want them to stay attractive (those owning cars for more than two years rose 41 percent from 2006 to 2015); nearly 600,000 drivers work for ride-sharing services in the United States that require them to maintain vehicle appearance; improved paint durability is consistently among the top three performance requirements for original equipment manufacturers; and 60 percent of all consumer complaints about autos are attributed to paint scratches and chip imperfections.

Currently, automobile coating manufacturers use two simple test methods to evaluate clearcoat scratch resistance and predict field performance: the crockmeter and the Amtech-Kistler car wash. The former is a device that uses a robotic ‘finger” moving back and forth with varying degrees of force to mimic damage from human contact and abrasive surfaces. The latter is a rotating wheel of brushes that simulate the impact of car washes on clearcoats.

“Unfortunately, both methods only assess clearcoat performance based on appearance, a qualitative measure where the results vary from test to test, and they don’t provide the quantitative data that scientifically helps us understand what happens to auto finishes in real life,” said NIST physicist Li Piin Sung, one of the authors of the new paper. “We demonstrated a test method that characterizes scratch mechanisms at the molecular level because that’s where the chemistry and physics happens … and where coatings can be engineered to be more resilient.”

For their test method, the researchers first tapped a diamond-tipped stylus across the surface of a polymer composite sample to map its morphology, then used the stylus to create a scratch and finally, retapped and remapped the surface. Three different scales of scratch tests–nano, micro and macro–were conducted using different size tips and different ranges of force.

The quantitative differences between the pre-scratch and post-scratch profiles, along with microscopic analyses of the scratches, provided valuable data on vulnerability to deformation (How deep does the scratch go?), fracture resistance (How much force does it take to crack the composite?) and resilience (How much does the material recover from the physical insult?). 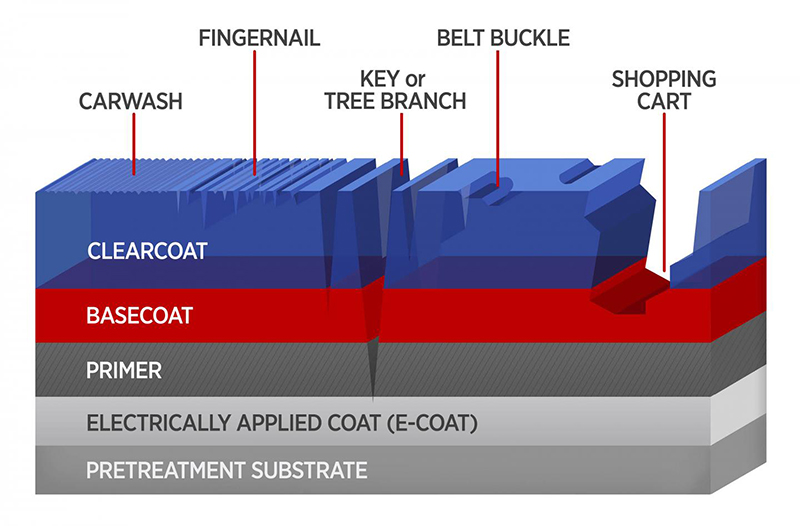 Schematic of the coating layers in a typical automobile composite body. Mar and scratch damages from a variety of object impacts are shown. Credit: Eastman Chemical Co./ K. Irvine, NIST

When scratches in the clearcoat are a few micrometers in depth and width, and occur without fracture, they are referred to as mars. These shallow, difficult-to-see deformations, Sung said, are most often the result of car washing. She explained that the nano-scratch test performed at NIST provided the best data on the mechanisms of marring and light scratches while the micro- and macro-scratch tests conducted by NIST’s partners were better at yielding detailed information about the larger, deeper and more visible deformations known as fracture scratches–the injuries caused by keys, tree branches, shopping carts and other solid objects.

“Data from the nano-scratch test also proved best for determining how well the coating responded to physical insult based on its crosslink density, the measure of how tightly the polymer components are bound together,” Sung said. “With this molecular-level understanding, clearcoat formulas can be improved so that they yield materials dense enough to be scratch resistant and resilient but not so hard that they cannot be worked with easily.”

The researchers concluded that to get the truest evaluation of clearcoat performance, the nano-, micro- and macro-scratch tests should be conducted in conjunction with the current industry standard methods.

“That way, one gets the complete picture of an auto body coating, both qualitatively and quantitatively characterized, so that the tougher coatings created in the lab will work just as well on the road,” Sung said. 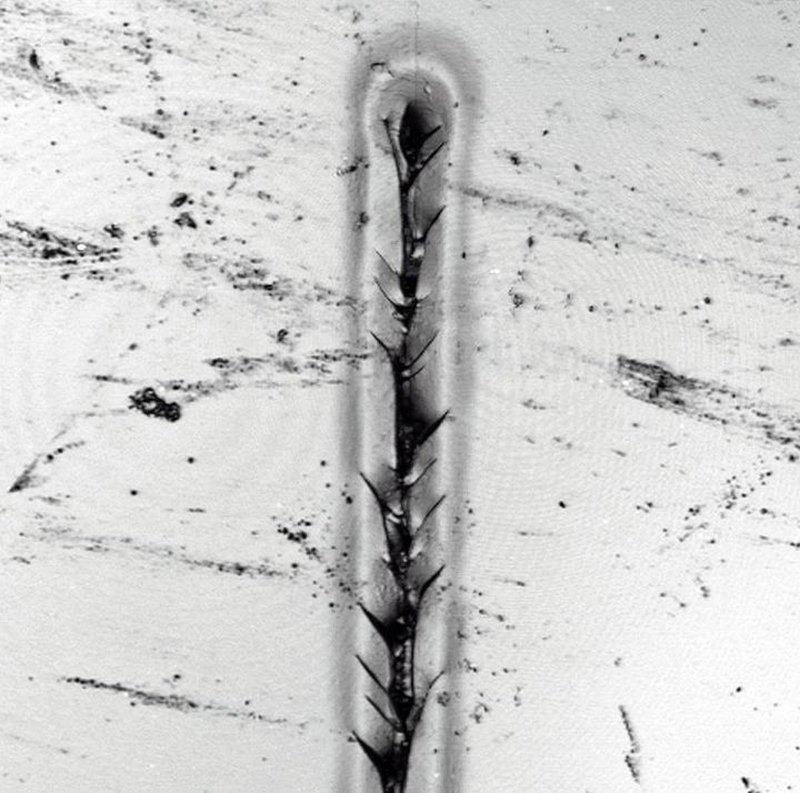 Photomicrograph showing the result of a NIST nanoscale scratch test on a sample of automobile clearcoat material. The scratch, which shows fractures radiating from the line of impact, is 20 micrometers wide, 150 micrometers long and 2 micrometers deep (A micrometer is a millionth of a meter or about half the length of an average E. coli bacterium.). Credit: NIST